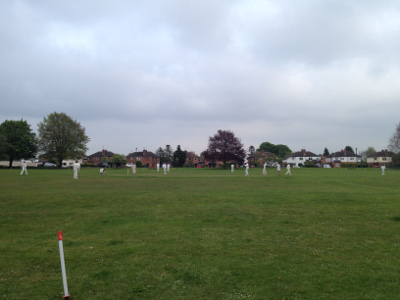 The last two balls of the penultimate over seemed to have decided it. The Philanderers opener, back in after racing to 25, had just hit Adrian for six and four.
True, that meant someone else would be facing the start of the final over but that would be another returned retiree, their all-rounder, and the visitors needed just three to win.
One wicket would do it for us of course but did we possess a miracle man whose deliveries would be either dot balls or wicket-takers?
We did. That man was Nusrat, three wickets and two catches already to his name. First he tied down his man and then, with three balls remaining tempted him into a big swing. A swing and a miss – Dave did the rest behind the stumps and a two-run victory was ours.
Played two, won two – what on earth is going on?
Damon lost the toss but probably won the war as he insisted on the ‘retire at 25’ rule we always play but hadn’t really thought much about because all our usual opponents apply it. The Philanderers weren’t happy about it, and with openers as good as theirs (we did manage to get the other one out just before he got to 25) you could see why.
Our visitors were a blend of young bucks and more mature players but it was plain that the latter category contained members who would have been formidable in their prime. One effortlessly extended an arm to catch Adrian in the deep; a glorious moment.
Dave and Jeff opened and both scored quickly before Aidan came in to do exactly what he did last week – score runs without looking remotely troubled. Adrian and George moved the scoreboard along; the former with big hitting, the latter with bold calling and running, but the skipper ran himself out and, despite Tim’s best efforts, the tail didn’t wag much at the end. 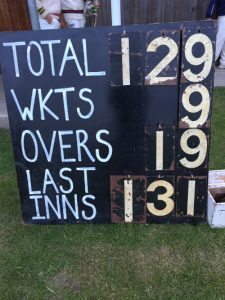 A score of 131 seemed decent enough by our own standards and the slowness of the pitch but some re-calibration quickly followed when their star opener set about our bowling. He was back in the hutch with just four overs on the scoreboard.
Nusrat and the Fixtures Secretary redressed the balance with some wickets in reply, including Nusrat taking a smart catch to get rid of the other opener for 23.
Tim and Adrian chipped in with wickets to dismiss some mere mortals but the all-rounder was keeping the Philanders on course before he too had to retire.
Jeff had already embarked on an excellent spell that saw him rewarded with two wickets, although those meant the two best batsmen were back at the crease.
We’d suffered a couple of one-wicket near miss defeats before, would this be another? Thanks to Nusrat it was not.
Phoenix
D Garman c Hegarty b Burnett 11
J Wilson c Dodson b Burnet 19
A Swain retired not out 25
A Foster c Hegarty b Dean 19
G Rolls b C Pearson 14
T Harrison not out 7
D Rainsford run out 0
J West not out 0
dnb S Creed, N Hamid, M Dobson
Extras 36
Total: 131-5
Philanderers
R Gill not out 35
C Rogers c Hamid b J West 23
D Pimblett b Hamid 0
J Bailey c Hamid b J West
S Harris c? b Hamid
E Dodson b Harrison 9
C Pearson st Garman b Hamid 25
G Hegarty c? b Foster 2
G Dean st Garman b Wilson 0
H White b Wilson 0
J Burnett c? b Hamid 9
Extras 25
Total: 129 all out

A simply sensational start to the season with contributions from every single player donning the shiny new Hill sponsored shirts.
With Gareth and Dave absent Damon resumed the captaincy and Nick donned the keeper’s gloves as Anglian made first use of a lively strip.
Simon and Jeff opened the bowling – and had three Anglian men back in the hutch cheaply, including the skipper.Anglian’s number three pinned their innings together with an impressive unbeaten 28 but he was the only visitor who truly mastered the surface.
Alex pulled off an instant catch of the season in the deep off his dad at the cost of a twisted ankle, which prevented him bowling.
But it didn’t hinder us as we continued to chip away at their innings, with Stuart and Nusrat taking a wicket apiece thanks to their nagging accuracy.
The tail, aided by double agent for the day Matt, wagged until the Fixtures Secretary returned to clean up the final three wickets, which included a fine catch at the second attempt by Stuart and a straightforward one by Nusrat to put an end to Matt’s dastardly resistance.

A total of 84 didn’t look daunting but on our pitch you never know yet Tim and Jeff played positively from the off, the scoreboard never stopped moving and the introduction of Aidan first wicket down proved to be decisive. He produced an imperious knock in which he looked comfortable throughout and signed off with a mighty six.
Peter and the skipper were left with the task of knocking off the remaining runs; Peter ended with an unbeaten 10 – a straight-driven four and a massive straight-driven six.
A very pleasing (delayed) start to the season.