Glorious sunshine rather than rain this week but the fact that the opposition only had 8 players meant it was a knockabout match once again. No matter, it was an enjoyable one against friendly opposition.

Dave and the Fixtures Secretary volunteered to play for the opposition with Olivia and Freya (combined age 22) making emergency Phoenix debuts – and both did brilliantly. Freya kept wicket (taking a catch and running out a batsman) and Olivia not only bowled well but was there with her dad when the winning runs were scored.

Anglian’s opener retired not out, as did Dave, but mainly the Phoenix bowlers were on top – including Gareth who took a wicket with an unplayable ball. Or something like that…

Debutant Badders took a wicket, as did George and Nusrat before Jeff came steaming in at the end to bowl two more out. Anglian’s total of 107 was never going to be enough.

And so it proved as opening pair Jeff and Badders raced to not out knocks, as did Gareth, and we won with plenty of overs to spare.

Our first fixture of the season ended in a comprehensive victory with every Phoenixer making a significant contribution. It was the first time we had beaten St Barnabas, who have plenty of useful players.
Gareth won the toss (yay/phew given the amount of available light) and we batted first (in sunshine).
Dave, Jeff and then Ralph all posted not out knocks with each hitting at least one 6. Aidan made 11, Damon somehow ran himself out for just one, Gareth made a brisk 19 and Bruce was not out at the end after Adrian tree-trunked the penultimate ball for a massive straight six.
Our total of 142 (not our highest ever but close) was defended with some lively bowling and even better fielding as the light faded (St Barnabas had earlier dropped three fairly straightforward catches).
Jeff and Stuart took a wicket apiece, Ralph took two including one with his first ball, Damon took a fine catch and Aidan ran someone out (literally).
The only downside of the evening was the constant evidence that out pitch is still far too variable with its bounce ie bloomin’ dangerous. 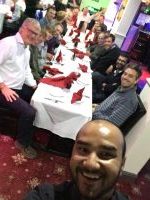 Six to tie off the last ball is always a big ask and so it proved as Phoenix fell just short in the gloom. Yep, this would have been another good toss to win.

This was the game that was rained off at the start of the season if you remember. Rain that is. Apparently it’s wet stuff that falls out of the sky.
St Barnabas elected to make us field in the heat (sound familiar?) and three of their bats managed to get to the retirement threshold or very near after Adrian dismissed George’s frenemy Gavin.
Alex had their remaining danger man caught behind after Jeff had removed a middle order man for a duck and George completed a run out too.
Just the four wickets for us then but only 116 runs for them despite all the batting to come: our ever-erratic pitch was once again refusing to help batsmen.
Dave and Jeff once again led the charge and the former was joined by Ralph, who hit a six on his way to another unbeaten knock.
Peter and Nick contributed a few each to keep the score ticking over as Damon, skipper in Gareth’s absence, came in at six to guide us home. Bruce provided the support act, guiding the shot of the day to the boundary.
We needed eight off the last over to win it and had Damon on strike but, with the sun long having disappeared behind the pavilion, he couldn’t get any of the first three balls away and when he hit the next for a brace it meant he had to retire. George came in for mission improbable but suffered the same fate and our third match of the season to be decided on the final ball went the way of the opposition.