Another landmark victory; a comfortable-in-the-end one against opponents who usually spank us.
We posted 147 for 6 on a pitch watered by Great Shelford’s new sprinkler system and therefore back to its old ‘unpredictable/occasionally lethal’ status. Hmm.

Three of our batsmen nonetheless retired to applause – first Jeff, then Ralph – whose 27* came from just 12 balls, including a six over the pavilion – and finally the skipper.
Our top five all made it to double figures and every Phoenix man got a bat, and scored at least one run. We went back into the field confident of success.
That was given a knocking in the very first over as one opener hit effortless successive sixes off Simon – and both gave Stuart even more brutal treatment in the next one. Grantchester, whose fielding had been sensational at times, were 31-0 off just 12 balls! 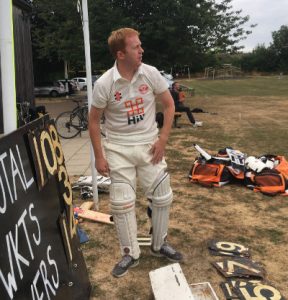 To their credit, our pair stuck at it and were rewarded with the wickets of their tormentors. Simon bowled the man who had hit him for the sixes and, after our Aussie had made short work of his replacement, Stuart induced a top edge that Dave pouched to turn 31-0 into 38-3.
That became 48-6 thanks to three wickets in four balls as the game swung further our way.
The Fixtures Secretary was in the thick of it, first by taking a running catch in the deep (insert appropriate number of ?!!???!!!s here) off Stuart, whose lbw appeal next ball persuaded the umpire to raise a digit.
Grantchester avoided the hat-trick but the Fixtures Secretary came on at the other end and induced a top edge to see off another bat off his first ball. Extraordinary.
The visitors responded with a solid partnership that saw both batsmen retire not out. One came back once the tailenders had had a go but we were well ahead by then thanks to tight bowling from the spin twins, who took a wicket apiece. Jeff took on the mantle of ‘death’ bowler and they couldn’t get him away.