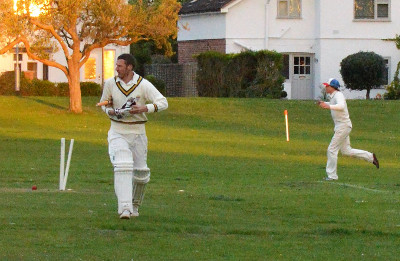 Wednesday May 10 2017, Stapleford Rec
Phoenix won by 13 runs
Phoenix won the toss and elected to bat

Runs, wickets, catches, the greatest over in Phoenix history and sunshine too – it was the evening we had all been waiting for.

Working hard towards too; this was a complete team performance against experienced opponents many of whom, helpfully for our scorer, had their names on the back of their shirts.
They destroyed us last season but this time it was a different story.
With Gareth still rumoured to be somewhere in the Audley End region Damon won the toss and we batted.
Gion the Groundsman got us off to an aggressive start and when he departed Ralph treated us to some more of his trademark elegant strokeplay (although both were dropped, giving an early hint that this might be our day).
Ralph’s unexpected demise saw Dave effortlessly assume the role of senior run-maker and he was aided by a flurry of middle order partners determined to keep the scoreboard ticking over.
Gareth’s breathless arrival plus the decision to keep Stuart and Damon back meant we had quite a tail to wag and boy did it do just that with the trio taking our score into three figures and up to 123-8 in the last few overs.
It was a total we would have a real go at defending.
Last summer three Anglian batsmen ended up smashing their way back to the pavilion and one was their opener. Who might well have done so again had Ralph not nonchalantly plucked a big hit out of the ether.
Then came the champagne super over from Tim, in a hurry to get away for a meeting elsewhere. First went the other opener, who sportingly walked after the square leg umpire admitted he hadn’t seen anything of Dave’s cunning fumble-stumping. The new man took a single only to see his partner bowled by the next ball. Next up was another of last season’s run-plunderers – and he was caught first ball in the deep by Nusrat, whose own pair of overs had been encouragingly miserly.
We were in a commanding position but Anglian’s middle order debutant had other ideas, smiting his way back to the pavilion to put the game back up for grabs.
Still we kept plugging away and Gion and Gareth were rewarded with wickets but Goff, their left-handed all-rounder and one of many Great Shelford club-mates on either side, was keeping Anglian up with the required run rate.
In the end it took a high-quality couple of overs at the close from Matt to not only keep him quiet but get him out as well.
That left Anglian needing 19 off the final over and surely not even the Fixtures Secretary could ‘Stokes’ that up?
First ball was an lbw shout, the second a was wicket, our eighth of the evening. Job almost done lads.
But who was this coming to join us? One Anglian batsman had been hurt earlier and couldn’t take part so back came the middle order smiter. Suddenly we weren’t so jubilant as memories of last week’s one-wicket near miss, entirely the creation of such a returnee, flashed into our nervous brains.
The next ball flashed into the bushes to stoke up more fears. But ball four cost us only a single and the other batsman couldn’t add to the total. We had won. Finally. Against a team that didn’t have small children making up the numbers, or people picking up a bat and requesting clarification on which end to hold.
We’ve made history boys. Let’s do it again. 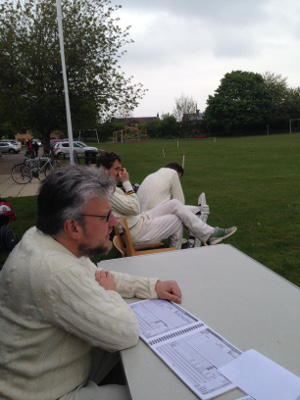 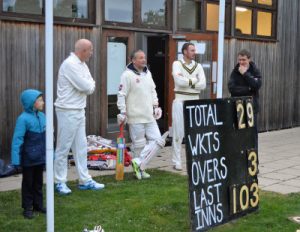