Match abandoned due to rain. 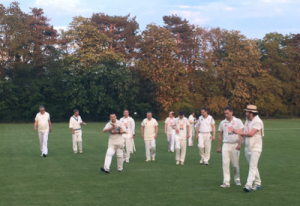 What a beautiful sight presented itself to us on our arrival; A warm late-May evening without cloud cover, a recreation ground that could have been a bowls green, kids having a water fight outside our changing rooms – all perfect for a cricket match against a new opposition.

Unusually I won the toss and elected to bat (which was a good start).
Dave had an evening stroll, a lovely walk out to the middle and then an amble back again two balls later. Nusrat, scoring, was untroubled.
Jeff and Aidan then tried to set about the bowling which was quite zippy and accurate and instead had to look for rotating the strike with quick singles.
Mr Extras, our 12th man, started to score quite heavily though, especially when the change bowlers came on.
Damon and I found ourselves together after Jeff and Aidan retired in quick succession and scored a few each. Nick and Bruce also got a swing near the end.
Adrian revealed a forward defensive of which Sir Geoffrey of Boycott would have been proud. He also got to run a three (with me) and then, perhaps related, was out next ball.

So all in all we reached a total of 136. Would that be enough? Would we remember it was fifteen eights rather than twenty sixes?

Mr Creed opened up with swing bowling and got his reward with an lbw decision from his “straight one”.
Jeff, after an expensive first over, tightened it up and snagged a deserved caught and bowled. His last and our penultimate over went for just two runs!
Nusrat has the ball on a bit of string when he bowls. Skilful. Inexpensive. So we all enjoyed his full toss that was slapped straight to Jeff at mid on.
Adrian bowled really well getting bounce and zip and generally making life difficult for their batsman.
Matt, our designated finisher did just that with no pressure on him, since the opposition were way behind the run rate. He took a wicket and sportingly let their batsman hit his last ball for 6 over third man.

All in all a lovely evening and good beer in the red lion. Ah, pub conversations….
“Matt was clocked at 62mph on the speed gun and Jeff is very similar pace”. Someone then pointed out that this was only true for the first couple of balls an over.

Glorious sunshine rather than rain this week but the fact that the opposition only had 8 players meant it was a knockabout match once again. No matter, it was an enjoyable one against friendly opposition.

Dave and the Fixtures Secretary volunteered to play for the opposition with Olivia and Freya (combined age 22) making emergency Phoenix debuts – and both did brilliantly. Freya kept wicket (taking a catch and running out a batsman) and Olivia not only bowled well but was there with her dad when the winning runs were scored.

Anglian’s opener retired not out, as did Dave, but mainly the Phoenix bowlers were on top – including Gareth who took a wicket with an unplayable ball. Or something like that…

Debutant Badders took a wicket, as did George and Nusrat before Jeff came steaming in at the end to bowl two more out. Anglian’s total of 107 was never going to be enough.

And so it proved as opening pair Jeff and Badders raced to not out knocks, as did Gareth, and we won with plenty of overs to spare.

Our first fixture of the season ended in a comprehensive victory with every Phoenixer making a significant contribution. It was the first time we had beaten St Barnabas, who have plenty of useful players.
Gareth won the toss (yay/phew given the amount of available light) and we batted first (in sunshine).
Dave, Jeff and then Ralph all posted not out knocks with each hitting at least one 6. Aidan made 11, Damon somehow ran himself out for just one, Gareth made a brisk 19 and Bruce was not out at the end after Adrian tree-trunked the penultimate ball for a massive straight six.
Our total of 142 (not our highest ever but close) was defended with some lively bowling and even better fielding as the light faded (St Barnabas had earlier dropped three fairly straightforward catches).
Jeff and Stuart took a wicket apiece, Ralph took two including one with his first ball, Damon took a fine catch and Aidan ran someone out (literally).
The only downside of the evening was the constant evidence that out pitch is still far too variable with its bounce ie bloomin’ dangerous.